Soon after the introduction of the GST regime the Australian Taxation Office (‘ATO’) issued a GST Fact Sheet titled ‘Correcting GST Mistakes’. This Fact Sheet provided an administrative process for taxpayers to correct certain mistakes on their next Business Activity Statement (BAS). This was a very pragmatic approach and was welcomed by taxpayers and their tax agents. In this absence of such an approach, technically any errors identified would have required the taxpayer to go back and amend each BAS to correct the mistake.

Unsurprisingly, there were limitations and conditions to be met based on the annual turnover of the taxpayer and the extent of the mistake. The annual turnover determined the time limit and there was also a correction limit. Broadly:

For example, where a taxpayer’s annual turnover was less than $20m the time limit was 18 months’ worth of BASs (such as 6 quarterly BASs, or 18 monthly BASs) and the correction limit was $5,000.

Somewhere along the way (essentially in 2013), the ATO changed its terminology from ‘mistake’ to ‘error’ and the ATO issued its most recent publication on this – a legislative determination titled ‘Goods and Services Tax: Correcting GST Errors Determination 2013‘. The ATO has also issued a document on its website simply titled ‘Correcting GST Errors‘ (issued May 2013).

So is there any substance in the terminology change? Well, not really. The determination defines a GST error to be ‘a mistake you made in working out your net amount for a tax period that would, if it was the only mistake made in the tax period, have resulted in your net amount or assessed net amount being overstated or understated’.

If the taxpayer has made a GST credit error (i.e. overstated GST net amount) this can be corrected on a later BAS provided the error occurred:

Practically, GST credit errors are able to be made on a later BAS provided that error is included in a BAS that starts within the four year general review period. Below is an ATO example:

Note: This is a significant change from the former administrative rule, where the time limit for taxpayers with an annual turnover of less than $20m was 18 months.

If the taxpayer has made a GST debit error (i.e. understated GST net amount) this can be corrected on a later BAS provided the error occurred:

The time and value limit components are set out in the table below: 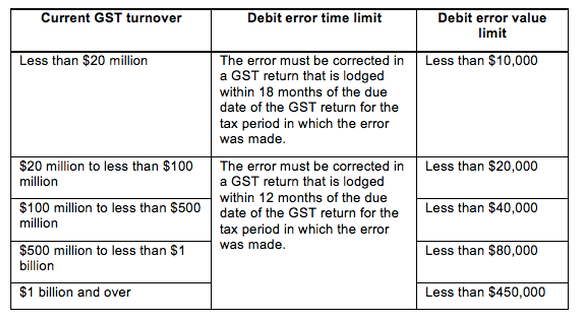 With regard to the debit error value limit, this is a net amount which allows credit errors to be offset against debit errors.

It should be noted that the determination only applies to GST errors that occurred on or after 1 July 2012.

Care must be taken to ensure that this process is only used to correct GST errors or mistakes. There are other mechanisms in the GST law to deal with matters such as GST adjustment events or GST change-in-use adjustments.

In the absence of these rules taxpayers would be required to go back and amend each previous BASs where a mistake has been identified, which would typically trigger general interest charge (‘GIC’) and/or penalties. Also, with GST being a transaction tax, significant additional administrative time may be required to amend prior BASs.

These rules regarding correcting GST mistakes/errors are a useful tool for taxpayers and tax agents, and it is worthwhile reviewing the ATO documentation and examples available.

This article was prepared by Simon Calabria. If you have any questions, or wish to seek advice on matters referred to in this article, we can be contacted on (03) 8662 3200 or consult@webbmartinconsulting.com.au.